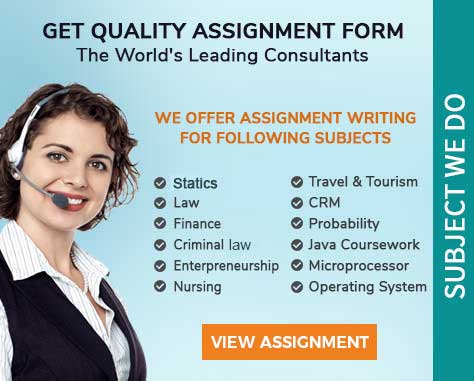 
The motor unit is the functional unit of muscle contraction, each unit consisting of a motor neuron and the muscle fibers it innervates. The neurons have long axons which pass from the central nervous system to the muscle in nerve bundles and then branch to the individual muscle fibers (Powers & Howley 2007).

The transfer of impulses along nerve and muscle fibers is accompanied by ionic changes. During the resting state, the outside of the fiber membrane has a positive polarity when compared with the inside. During the transmission of the nerve impulse, the polarity of the cell wall changes. There is a depolarization followed by a repolarization (Wilmore & Costill 2004).

Since the cells are immersed in an ionic fluid, the nerve impulse which is committed by the changes in electrical potential are transmitted away from their point of origin in successive waves. The changes in electrical potential (mV) in working muscle can be recorded at the muscle surface with an appropriate sensing device that is a simple, very sensitive, voltmeter (a galvanometer). The voltmeter records the voltage difference between two points and the graph of the voltage difference accompanying muscle contraction is called an electromyogram (EMG, Fig 1) (Sinning 1975). 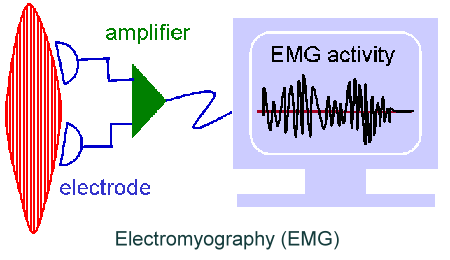 The force developed during muscle contraction is dependent on both the number of motor neurons discharging nerve impulses and the frequency with which the discharges occur. The amplitude and frequency of the EMG during exercise can reflect the recruitment of motor units and the frequency of nerve impulse transmitted in the working muscle, respectively (Sinning 1975). The increase in EMG amplitude may be partly resulted from the increase in neural stimulation to the muscle, indirectly indicating the increase in motor unit recruitment. The purpose of this study was to demonstrate the relationships between muscle stimulation and (1) force output; and (2) muscle fatigue.

A male PE major student voluntarily participated in this study. He was 21 years old with body stature of 180 cm, and body weight of 75 kg.

The subject stood erect holding the forearm in the 90° flexed position with the hand supinated (Fig. 3). The upper arm was held in the vertical position and was blocked from behind by another member of the laboratory group.

Place weights in the subject's hand, starting with 5 lb for the first trial and then progressing in a sequence of 5-lb. increments, to a maximum of 15 lb. Take an EMG recording about 20 sec for each trial. An assistant supported the weights while the subject maintains the 90° flexed position. When ready to record, started the EMG recorder and then lowered the weight so that the subject must support it with his biceps brachialis. The recorder would be turned off after a recording of the desired time was attained. During the recording, the subject maintained the 90° flexed position throughout these procedures. After 2-3 min rest, subject started the test with a heavier weight. 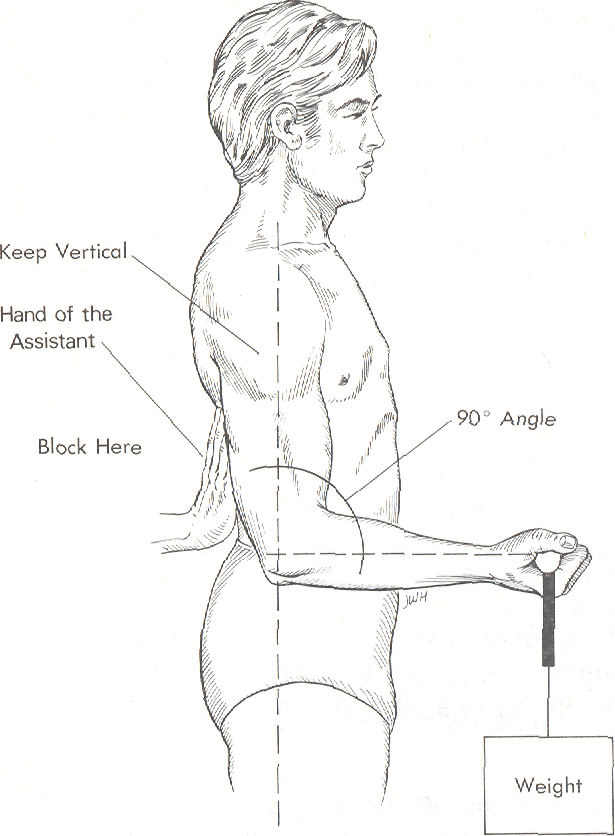 The subject stood erect with the arm braced by another person and the forearm held in the extended position. The subject grasped a 5/10-lb weight in his hand and performed full flexion-extension movements of the forearm at a pace of 30 moves per minute for two minutes.  EMG of the biceps brachialis was recorded through-out the test.

Electrodes, which were small metal discs used to detect electrical changes, were placed at two points. One electrode was placed over the motor point of the biceps brachialis, which was the place where the nerve fiber enters the muscle (Fig. 4). All the nerve impulses going to the muscle must pass through it. A second electrode was placed some distance from the motor point along the long axis of the muscle. This was the indifferent electrode which serves as a reference against which to measure potential changes in the other electrode. A third electrode was usually attached at elbow where there was little or no muscle between the skin and bone as a ground to drain off any stray electricity that might interfere with the recording. 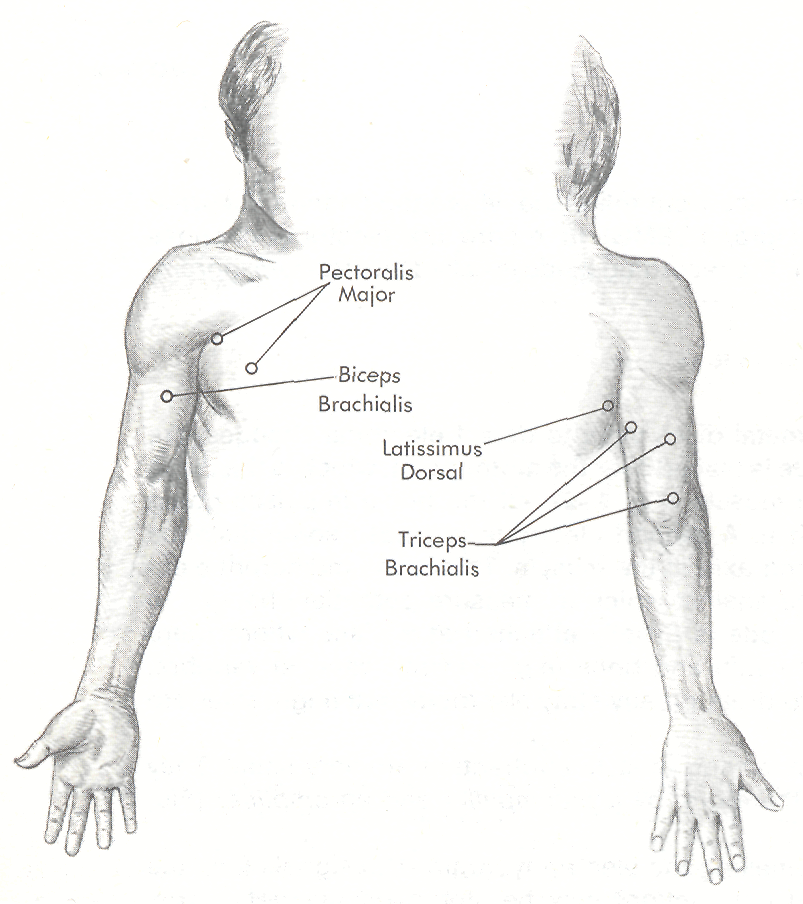 Before placing the electrodes on the biceps brachialis, the skin over the motor point was cleaned thoroughly to increase the electrical conductivity in the area. Fatty oils were removed by alcohol and the dead skin cells were removed by lightly rubbing the skin with a paper towel.

The potential changes accompanying muscle contraction were very small and were amplified by a preamplifier and an amplifier (Fig. 5).  All EMG signals were recorded with a data recording system (PowerLab, ADInstruments, Sydney, NSW, Australia) and displayed on-line with computer monitor. 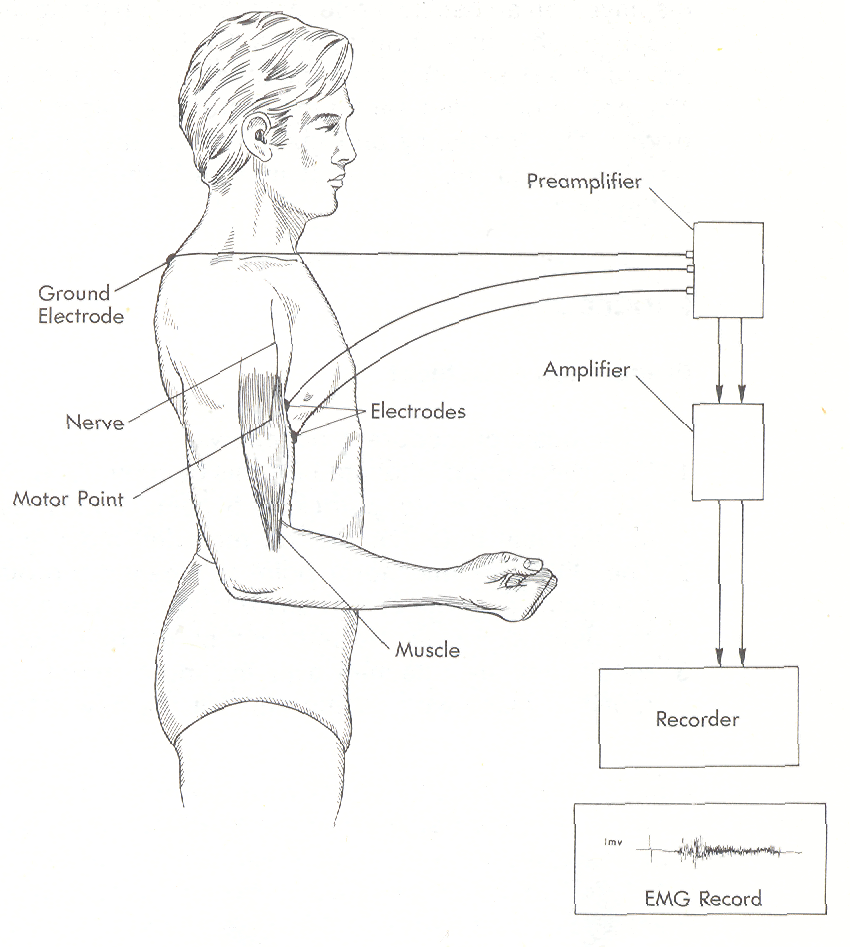 Draw a diagram of the EMG pattern you observed for each load to illustrate the difference in amplitude among loads. (please draw the diagram separately and with clear label and unit of x and y axis)

Tired of the boring assignments to be submitted to colleges and universities? MyAssignmentMart.com gives you multiple reasons to trust it with your orders. We employ PhD experts handpicked from prestigious universities over the globe. We cater to quality assignment help, dissertation writing services and online essay help, covering more than 100 academic subjects. We pledge to complete your assignments on time and never compromise when it comes to deadline. Our prices for assignments are the most competitive in the market and make sure the cost suits your budget.